Saltar al contenido
We want to announce to every readers of The Monserga of Football in the Caribbean Islands that the Greatest Colombia´s Smokeseller, Pashow Maturana, is almost confirmed as New Coach of Trinidad and Tobago.

This gentleman was reccommended because his skin similar to the local people (dark-blue grading to black) and because their knowledge of the philosophy of the most ancient masters of football. He apparently said once: «If you lose you won a bit«, which is very convenient for this small and poor nation, as they used to lost more than win in football. Remember that they qualified for the last World Cup because their big milk (?), finishing 4th in a CONCACAF group full of dead teams and players and later winning to Bahrein in the Re-fishing (?). 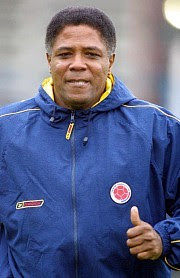 Run, Pashow, Run!We want to congratulate to all our readers in Trinidad and Tobago (Hello, Dwight! (?)), as we think than after their experience with Pashow the local football blogs will increase strongly. Besides, if something goes wrong, you can use Mr Pashow as dentist anyway, replacing the lack of medical professionals on those islands.And for the Trinidad & Tobago Powerful DIM supporters (?), we want to congratulate too, because soon you will have a beautiful project called «Ball Dreams».