Saltar al contenido
We feel very sorry to announce to you, all the readers of The Monserga of Football, that the adventures of Pashow Maturana in the Caribbean, had finished.

We know that all of the colombian readers of TMOF are feeling very bad with this news, because with the departure of Pa$how, we lost one more choice to have one national team to «be Colombia in the World Cup«. Do not tell ourselves lies (?)… All we know that it is very difficult to watch Colombia in South Africa´s stadiums with a team where Hugh Roda-coming and Radamel «The New Aristi» Falcao are our forwards, and Macnelly Towers and Stalin Dot are the Pibe´s replacements! 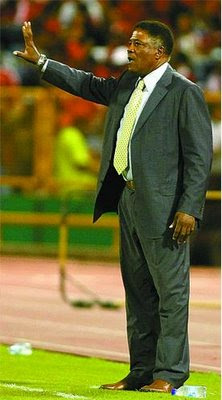 Pashow gaining more experience in Port SpainPashow resigned as Trinidad & Tobago manager because some differences of opinion with the Trimayor (?), the maximum organization of T&T football. Some confidential reports indicate that Pashow said after the embarrassing defeat againts USA last week «Be cool, anyway, tomorrow in Port Spain the little birds will be singing«. The Trimayor executive members did not understand what the colombian dentist was saying; Pashow explained later to some close relatives: «Experiences as these defeats are very important for the team, is not true?. As we lost more matches, the team will become more experienced. But these Trimayor members only want to win… and in this way I can´t work«…. and later he resigned.Some local newspapers had criticized the convocatories that Pashow made for the last World Cup Qualifying matches. Yes, with the great quantity of cracks and all the great players in Trinidad and Tobago, we don´t understand why they are not doing a better performance! The colombian philosopher had several of experience$ in clubs and national teams of Colombia, Argentina, Costa Rica, Peru, Ecuador and Spain. He managed the Colombia golden age, together with his assistant, Hernán «The Wood Stick» Gómez, and players as Carlos «The Pibe» Valderrama, Leonel Alvarez, Luis Carlos «The Ugly Big Fish» Perea, Anthony «The Smurf» De Avila, Arnold Iguarán and Ivan «The Big Cheek» Valenciano, as others.The Monserga of Football want to wish good luck to Mr Pashow Maturana in any adventure he has from now on. But we hope that these adventures will not be in our loved Powerful DIM … please stay away from the Red of the Mountain!

20 pensamientos sobre “¡¡Oh, man!! The adventures of Pashow in Trinidad had finished..”